The Spanish National Soccer Team: The Tiki-Taka Playing Style May 27, 2015 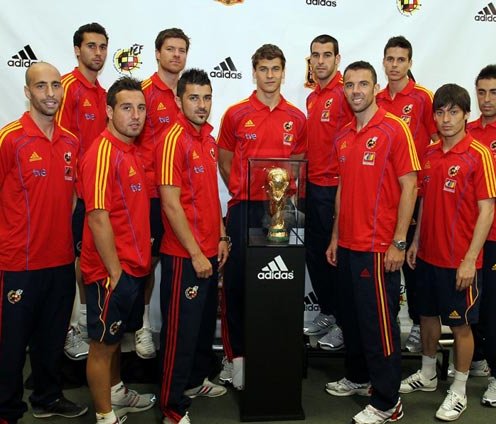 For Spain to control the ball for long periods of time, every player is focused on supporting the ball. The support and style of their possession has actually caused them some criticism for a long time because didn't have any real strikers. Every player is part of the offense, because they are constantly working the ball through the defense, midfield, and offense with short passes. The distinction between positions becomes blurred. The versatility of the Spanish players is what allows them to control the play with such ease.

When analyzing Spain, people often mention that the keepers rarely see shots. This is no accident. The Spanish team defends by maintaining possession: They know that if they have the ball, the other team can't score. They maintain possession at all costs. To do this, they are incredibly patient. When watching a Spain game you will quickly notice how often the ball moves backwards and the play is reset. The low score is a result of their offensive mentality. Spanish players do not shoot when they have mediocre opportunities. The team will only shoot if there is a perfect chance and that often means virtually dribbling the ball into the net.

The Tiki-Taka playing style has truly revolutionized the game of soccer and so much can be learned from this new strategy. Since Spain and Barcelona's success with the strategy, teams all over the world have embraced the style- from England and Arsenal to as far down as the college level. And while Spain may have suffered fatigue during 2014's World Cup, the style isn't dead by any means.